By Connecting People with Nature, and Writers with Words January 31, 2021
Two special women in my life just passed and I find myself filled with nostalgia for my own mother and for a childhood that was, by all measures, a good one. And yet there were tragedies, as with all childhoods. This poem, in this new year, takes me into the heart of a few of these memories... 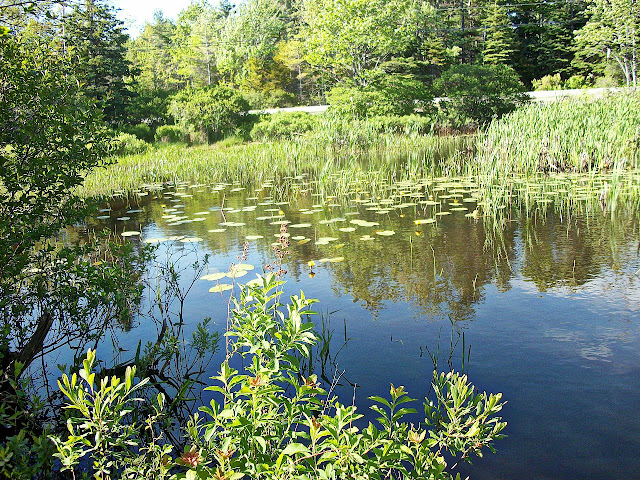 Forty-five years ago, Colorado’s South Platte River
left her banks and thrust herself at the tall cottonwoods
whose deep roots until that moment drank
matter-of-factly from her mossy waters near
the frog pond by my childhood home
twenty feet tall, the river roared across mowed lawns
scoured cul-de-sacs, inundated our home
as indiscriminately as she snatched Betsy Grant’s
two-story brick house, carving a gaping hole
where the basement had been, leaving nothing
but a curtain rod. I do not remember if the day
the rains came, on the heels of mountain snowmelt
if on that day, a rainbow – like now, here
on the Green River – stretched across the blue
horizon offering itself as retribution and apology
a covenant between earth and sky pledging in hues
of orange and yellow and green never to snatch
another home, or flood another field. I do not remember
feeling betrayed by the river that took our home
that day, perhaps nostalgic, thinking of
the days I had walked the river shore hunting
driftwood, how innocently I had skirted the murky
places where quicksand lurked, or spent drowsy
afternoons sitting in the sun beside the mossy pond. Frogs lived
among the logs that floated there. Deep throaty bellows
ricocheted across the stagnant waters, the frogs’ bulbous eyes
attached to the sides of their bony skulls like peeled grapes.
I wondered after the flood ravaged our home, what became
of the frogs and the flat-leafed lilies, I never found
their green bodies floating among the river debris as I found
the skulls of cows and horses washed from farm fields
to flounder beneath the soggy sky. I never found the frogs
nor the lilies, nor the curtain that once hung
in Betsy Grant’s bedroom, nor the innocence I knew
before the river snatched our home. Here
on Utah’s Green River, I watch a burrowing toad
and towering red sandstone cliffs and think of my sister
in Hawaii and of our last Christmas with our mother
how Brooke’s friend Upali laid lentil cakes and a hand mirror
wrapped in red satin at our mother’s feet because
in his country of Sri Lanka, half-way across the world,
mothers are to be honored. I think of how, only hours
after we ate the spiced lentil cakes, a giant tsunami
struck the villages of Upali’s homeland where long-legged
spoonbills waded among reed-beds, where male birds
gathered sticks from old nests for the building
of new nests. I wonder now if their nests survived the tsunami
if Upali’s family wandered the scoured seashore
searching for loved ones among the debris
if the clouds that once gathered above
the sloped mountains of Colorado found their way
to the leaden sky above the turbulent blue waters of
Sri Lanka. Here now, on the edge of the Green River
I sit beneath a blue sky that stretches like decades
across memories and miles 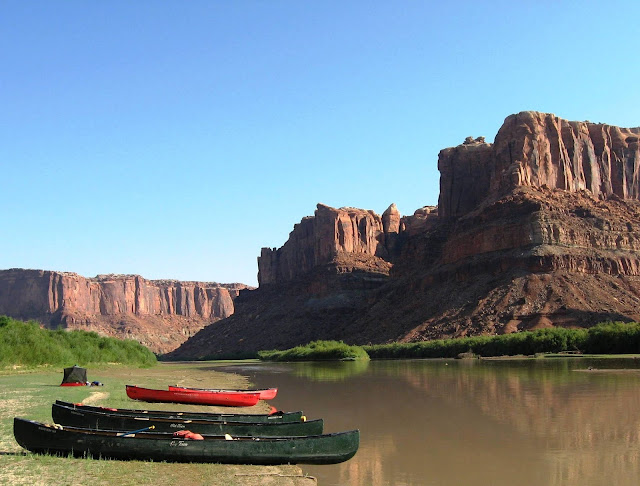 and contemplate the canoes straddling the shoreline
like salmon far from home and think of the river fish
gasping for breath in the mud-filled living room
where my sister and I once played chess with our father
where once, when our parents were both alive, we spread
world maps on the white carpet and traced with our fingertips
the borders of foreign countries, traced the black curves
of the Pearl of the Indian Ocean when Sri Lanka was Ceylon
when Upali was just a dark wiry boy
living among satinwood trees
when I was just a pleasantly plump blonde girl drifting
among cottonwoods, long before I soaked my bones
in a hot tub at the foot of a softly sloping mountain
drinking hot toddies, watching snowflakes melt
in the steam of another lifetime.
P.S. Here is a photo of Upali at my sister's in Hawaii with my husband John and me, taken in 2015. 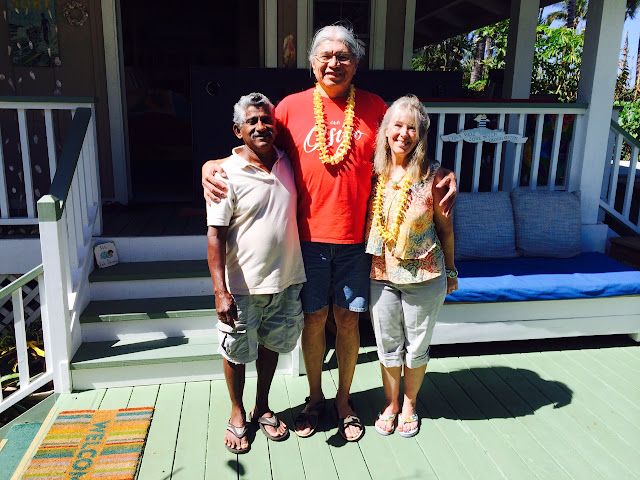