Showing posts from June, 2015
Show all

The Last Unicorn - Searching for the Saola with William deBuys

By Connecting People with Nature, and Writers with Words June 29, 2015 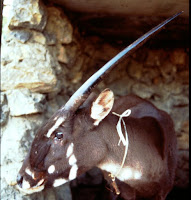 In 2011, writer William deBuys joined conservation biologist William Robichaud on a trek into the jungled river country of Laos in search of the elusive and endangered saola, one of the earth’s rarest creatures. The small country of Laos, surrounded by China, Vietnam, Cambodia, and Thailand, holds within its fragile borders a richly diverse, rapidly disappearing ecosystem.  Smugglers from Vietnam, their own country now devoid of its once plentiful flora and fauna, haul out everything from Siamese rosewood to elephant trunk snakes and scaly “pangolin” anteaters.  Most of the contraband is en route to China. The Vietnam I knew in the late 1960s—when many of my male friends were either drafted into the Army, or recruited by the Air Force or Naval Academy after graduation—was a country divided north from south. I knew Vietnam only by what I saw on the news, or by what our liberal, armband-wearing civics teacher whispered about “the political truth” of this unholy war. What li
2 comments
READ MORE »
More posts