Showing posts from July, 2010
Show all

The Liquid Spirit of Water

By Connecting People with Nature, and Writers with Words July 21, 2010 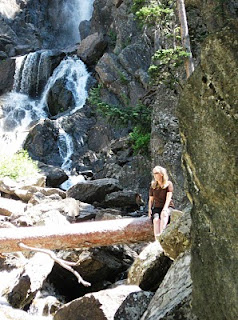 THE LIFE FORCE that moves through us, and through every drop of water and layer of slick rock, is as familiar as our own breath, yet as hard to grasp as the wind that rustles the cottonwoods.  We are told that the elements of science are kin to the elements of human nature: that those with Fire in their souls possess a radiant energy, an enthusiasm that brings color and vibrancy into the world; that those with Earth in their souls are well grounded and have enduring and nurturing qualities; that the currents of thought and spirit flow most freely through those with Airy dispositions.  YET MODERN SCIENTISTS of ancient astrology believe that our deepest emotions – our most fervent passions – are expressed best by those with the liquid spirit of Water, the formless potential out of which all creation flows.  Waterfalls overwhelm us with the power of their sensual – and yes – female natures .  SPRING AFTER SPRING, they seem to hurl themselves over the edges of their own fast-flowing desir
16 comments
READ MORE »

Shining a Light on Ted Kooser, American Life in Poetry, and Two Women Poets from Wyoming

By Connecting People with Nature, and Writers with Words July 07, 2010

I’ve been spending the day with two poems —both written by western women (both over 40, by the way), both published, both about a man and a woman—but both paint very different portraits of the relationship between a husband and wife. The first poem, “Denial” by Pat Frolander , just appeared on TED KOOSER'S COLUMN  American Life in Poetry  and is included in Pat's chapbook Grassland Genealogy (Finishing Line Press, Kentucky, 2009).  These poems are, to quote past Wyoming poet laureate Robert Roripaugh, filled with the "subtle strands of heart and mind that tie humans and animals to each other and the grasslands they share." Please click HERE to read Pat's poem.  Ted Kooser , a Pulitzer prize-winning poet and one of our nation’s esteemed poet laureates , is from the Great Plains, the heartland of America. He is widely praised for his "plainspoken style, his gift for metaphor, and his quiet discoveries of beauty in ordinary things.”  To listen to an NPR inter
12 comments
READ MORE »
More posts