Showing posts from November, 2017
Show all

Gathering from the Grassland with Linda Hasselstrom

By Connecting People with Nature, and Writers with Words November 30, 2017 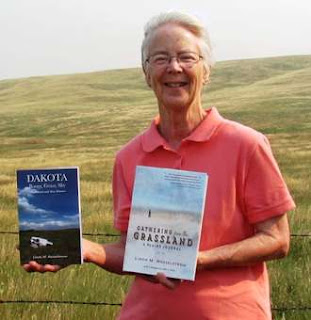 I am contemplating the November 30 th entry in Linda Hasselstrom’s new book, Gathering from the Grassland: A Plains Journal. I am also contemplating what I see as the three-dimensional structure of the book. It is more than linear entries which invite the reader, day by day, into a year of Linda’s life on the plains of South Dakota.  This book stands as humbly and remarkably steady as a three-legged stool. One might say this about all of Linda’s admirable body of work . She is a gifted wordsmith, but it is not her well-wrought language that she wants us to notice, but the earth upon which that body of work rests—steady as a three-legged stool on a patch of shortgrass prairie. (I hope you're smiling, Linda.) Let’s talk about those three legs. First, deep mapping. The idea of “deep-mapping first occurred to me several years ago when I was reading an interview with Robert Lawlor in Parabola: Myth and Tradition. In the interview, Lawlor speaks of the Aboriginal belief t
2 comments
READ MORE »
More posts