Showing posts from April, 2009
Show all

By Connecting People with Nature, and Writers with Words April 20, 2009 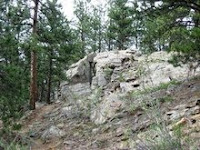 Ten years ago today our 16-year-old son Matt wandered the ponderosa forests of Wyoming’s Bear Lodge Mountains near our ranch with a twelve-gauge shotgun, a couple of apples, deer jerky, a few sandwiches, and two hunting buddies. It was opening day of wild turkey season.

400 miles south, on this same day, Eric Harris and Dylan Klebold terrorized and killed 12 students and one teacher at Columbine High School in Littleton, Colorado. Before the day was over, they too would be dead.  I spent most of my growing up years in Littleton, a town whose roots spread from the foothills west into the Rocky Mountains, and east into the shortgrass prairies. The ancestors of the Merriam turkeys that now wander the Bear Lodge Mountains of Wyoming were once native to the ponderosa forests of Colorado.


My son had been excited about opening day for months. This was his first turkey hunt. He and his two friends (one an experienced hunter and wildlife artist, the other a member of a professional outfitting f…
15 comments
READ MORE »
More posts