Showing posts from November, 2009
Show all

By Connecting People with Nature, and Writers with Words November 29, 2009 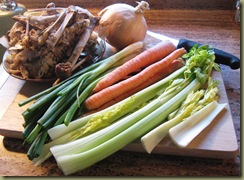 According to The Wall Street Journal, 46 million domestic, farm-raised turkeys were devoured   this week (including the 13 pound turkey whose bones have been stewing in my soup kettle until an hour ago).  It’s probably fair to say that none of us ever saw “our bird” fully feathered, or heard it gobble, or knew whether a “hen” or a “jake” was gracing our dinner platter.  I haven’t had this kind of intimate relationship with a Thanksgiving turkey since leaving our Wyoming ranch a few years ago, and I miss it.  The picture below was taken by Seven J Outfitters on land adjacent to our ranch. I do not know these hunters but no doubt I’ve seen this turkey’s brethren foraging on our hay meadow. These are the same turkeys my son and daughter watched through the seasons when growing up , including hunting season.  “If they’re too many jakes,” my son once told me, “they’ll harass the nesting hens, and not enough eggs will hatch.”  He used to spend days out in the woods, studying the bands o
16 comments
READ MORE »

By Connecting People with Nature, and Writers with Words November 20, 2009

I met Colum 4 years ago (please see previous post below) and am thrilled Let the Great World Spin has won.  Go to NPR to learn more and read about it from the Associated Press News Release .  Here’s an excerpt: “McCann won the fiction prize for "Let the Great World Spin," a novel about daring, luck and mortality in the pre-digital world of 1970s New York. “He has called his book an act of hope written in part as a response to the Sept. 11, 2001 terrorist attacks. Accepting his prize, McCann praised the generosity of American fiction and of the American people.”
Post a Comment
READ MORE »

Colum McCann. Luck of the Irish? Or just a fine, fine novelist?

By Connecting People with Nature, and Writers with Words November 08, 2009 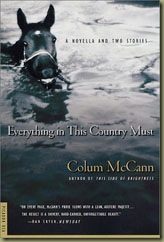 “A summer flood came and our draft horse got caught in the river.  The river smashed against stones and the sound of it to me was like the turning of locks.  It was silage time and the water smelled of grass.  The draft horse, Father’s favorite, had stepped in the river for a sniff maybe and she was caught, couldn’t move, her foreleg trapped between rocks.  Father found her and called Katie! above the wailing rain.  I was in the barn waiting for drips on my tongue from the ceiling hole.” These are the opening words to Colum McCann’s short story “Everything in This Country Must,” first published in The Atlantic in 2001 and later published in book form (along with another short story and a novella) by Macmillan/Picador . I met Colum McCann in June of 2005 at the Aspen Summer Words Literary Festival in Colorado.  Colum was part of an impressive lineup of Irish authors, including Robert Boswell, Grande Dame Edna O’Brien, Polly Devlin, Nuala O’Faolain, Paul Muldoon, and Marie Pons
7 comments
READ MORE »
More posts