Showing posts from June, 2016
Show all

Dan Flores and Coyotes in America: Half a Million Years of Survival

By Connecting People with Nature, and Writers with Words June 30, 2016 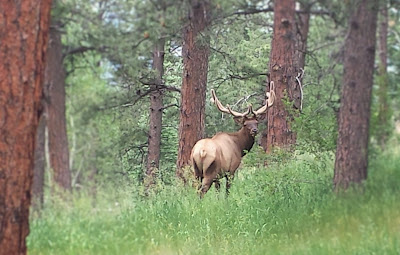 I was writing this morning about a day several years ago when I watched a massive bull elk with his harem in the Bighorn Mountains near Wyoming's Cloud Peak Wilderness area.  Deeply immersed in describing the bull's tawny coat and dark, ragged mane, I took a break to go outside and stretch when this handsome fellow appeared in our backyard, as if the writing itself had manifested him in the tall grass.  I love it when that happens.   Animal encounters happen to my friend, historian Dan Flores , too.  His new book Coyote America: A Natural and Supernatural History , opens with a story about the time he was visiting his parents in Louisiana and a coyote passed by mere feet away, shooting him a sideways glance with its "hot yellow eyes."  This photo was taken by Dan when a coyote appeared in the early morning light outside his back door. Coyote encounters are now happening everywhere - thousands of them. In our cities, our countrysides, our suburbs, even our coff
Post a Comment
READ MORE »
More posts