Showing posts from January, 2016
Show all

The Vengeful Heart that Drives Moby Dick and The Revenant

By Connecting People with Nature, and Writers with Words January 10, 2016 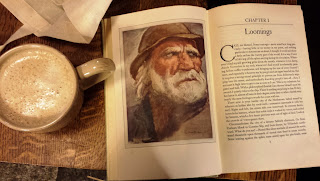 Reading my father's copy of Moby Dick,  The Limited Edition's Club, 1943. First line: "Call me Ishmael." (#1 of 100 Best First Lines from Novels) Before the monstrous sperm whale “reaped away Ahab’s leg,” the raging Captain had “dashed at the whale with a six inch blade to reach the fathom deep life of Moby Dick.” So wrote Herman Melville. And ever since that fatal encounter, Ahab had “cherished a wild vindictiveness against the whale…. He piled upon the whale’s white hump the sum of all the rage and hate felt by his whole race from Adam down, and then as if his heart had been a mortar, he burst his hot heart’s shell upon it.”* Rage. The desire for revenge. “Gnawed within and scorched without," Ahab was intent on "an audacious and supernatural revenge." It drove Captain Ahab some said to madness. And surely Herman Melville inhabited a bit of that madness as he penned the novel now considered an American classic. The Heart of the Sea Traile
1 comment
READ MORE »
More posts