Showing posts from November, 2015
Show all

By Connecting People with Nature, and Writers with Words November 04, 2015 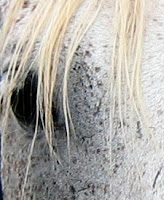 Farside Last night Farside was lifted from the world of the seen, into the world of the unseen. I did not awaken yesterday sensing that the day would be filled with heartrending decisions. I did not envision holding Farside’s proud Arab head in my arms, stroking his neck, running my hands along the length of his still body. Nor did I know when I awoke yesterday that my corral friends, Farside’s human herd, would gather around us during a twelve-hour vigil, or that Dominica, the big white warmblood who has been Farside’s closest companion for seven years, would come to touch noses and bid him adieu. In the end, five women were with Farside and me—offering strength, solace, prayer. “You were his life blessing, Page,” Sheri said. “Send him to the love and light.”   Farside and Tripp, Wyoming Before Farside came to live here with me in these green mountain pastures, he and Sheri traveled over 4000 competitive trail miles together—in Utah, Colorado, Arizona, New Mexico.  In the
26 comments
READ MORE »
More posts