Showing posts from January, 2009
Show all

Kids, Chores, and a Sense of Purpose

By Connecting People with Nature, and Writers with Words January 29, 2009 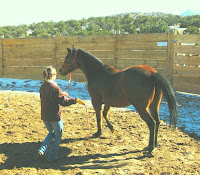 Word is out that the Obama girls will continue making their own beds and doing chores at the White House, just like they did back home in Chicago. Maybe they’ll take turns feeding the family dog and taking their new pet for bathroom breaks on the White House lawn. I hope so. I hope they even have to scoop a little poop. Kids need outdoor chores. We all do. The only time I didn’t have outdoor chores was when I moved to Santa Fe for a year and a half in 2006. Within a few months, I started volunteering weekly at the Santa Fe Horse Shelter . I loved the sense of purpose that came with pulling on my “chore clothes,” getting in the car, driving out of town and into the high desert, then arriving at the Shelter. Lilly, the bay mare I worked with, greeted me with a nicker and suddenly all was right in my world. Hers too, I like to think. That's my daughter with her in the round pen. I made it a point to visit with some of the youth exhibitors at Denver’s National Western Stock Show
15 comments
READ MORE »

By Connecting People with Nature, and Writers with Words January 22, 2009
Yesterday's Entertainment section of Time.com features the article "Books Unbound" (by Chris Jackson/Getty). The story starts with a true Cinderella-like parable about unknown author Lisa Genova's novel Still Alice . Unable to interest an agent or publishing house in the novel, Lisa finally forked over $450 and had iUniverse publish it. Like Cinderella , Lisa's story has a happy ending. "Genova wound up getting an agent after all," writes Jackson, "and an offer from Simon & Schuster of just over half a million dollars. Borders and Target chose it for their book clubs. Barnes & Noble made it a Discover pick . On Jan. 25, Still Alice will make its debut on the New York Times best-seller list at No. 5." I have a friend in Denver who has a similarly amazing story - a self-published book picked up by a major publishing house for an outrageously obscene amount of money. What's interesting about these stories is the light they
12 comments
READ MORE »

How Animals Make Us Human; Field Work; Grassroots and Obama - Connecting the Dots

By Connecting People with Nature, and Writers with Words January 17, 2009

Dot #1. Last night, I went to hear Temple Grandin (university professor and autistic animal behavior guru) speak to a packed crowd at the Tattered Cover Book Store in Denver. She's on tour for her new book, Animals Make Us Human , just released by Houghton Mifflin Harcourt . Dot #2 . In response to a question from the audience about the meaning of " organic " meat, Dr. Grandin posed an interesting question: Should the designation "organic" take into consideration not only take what the animal eats, but also the animal's lifestyle ? Grandin thinks it should. “It's not enough to say that beef cattle are on pasture, but 75% of that pasture must have a root system. The animal must be on that pasture at least from the last hard frost to the first hard frost." Dot #3. Well, Grandin will tell you that's pretty much the way good ranchers have been doing it all along, taking care of the roots that literally feed the family. Not only are the cat
15 comments
READ MORE »

Jeremiah the Bullfrog, Little Fishes, & Joy to the World

By Connecting People with Nature, and Writers with Words January 04, 2009 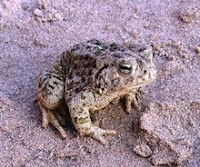 National and local media may be focused on dire predictions for 2009, but last night at the Boettcher Concert Hall ( Denver Center for the Performing Arts ), Three Dog Night, accompanied by the Colorado Symphony Orchestra , sang to an enthusiastic if not slightly grey crowd. Their final song, " Joy to the World ," had us all standing, clapping, and "dancing to the music." Well, at least as much as one can in such a fancy venue. But the point here is not the age of the audience, but the fact that we were all eager to embrace lyrics both hopeful and innocent. "The world is black, the world is white, it turns by day and then by night, a child is black, a child is white, the whole world looks upon the sight, a beautiful sight..." I'll bet Barrack Obama's mother grew up listening to Three Dog Night, and if so, hats off to Three Dog. And then there's Jeremiah. When I was a kid, I had bullfrog friends too. There was a pond down by the river wher
8 comments
READ MORE »
More posts