Showing posts from November, 2018
Show all

By Connecting People with Nature, and Writers with Words November 30, 2018 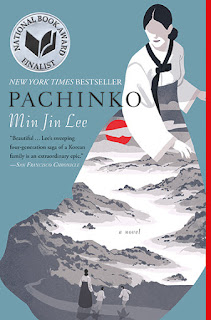 I first became aware of Korea as an iconic setting for profound fiction when reading Paul Yoon’s award-winning collection of short stories, Once the Shore . Despite having traveled to over 27 countries by the time I was thirteen, I’m embarrassed to say how little I knew about Korea, or about Korean literature. Korea has once again risen to the forefront of our nation’s consciousness. Divided into two nations in 1948, the colonization of Korea by Japan began before 1910. Korea was ruled by the imperial nation of Japan until the end of World War II. Over 5 million Koreans were forced into labor, and (according to CNN), over 200,000 young Korean girls and women (known as “comfort women) were forced into sexual slavery for the Japanese military.  Which brings me to Korean-born American author Min Jin Lee, and her epic novel PACHINKO .   I met Min Jin Lee last February at Denver's Tattered Cover Bookstore ’s annual Literary Feast. “I come from a working-class background,” M
Post a Comment
READ MORE »
More posts