Showing posts from August, 2008
Show all

By Connecting People with Nature, and Writers with Words August 26, 2008

Last weekend in Steamboat Springs I appeared on a local television station, Steamboat TV18 , and then at the local bookstore for a reading. One of the best things about Steamboat Springs is Erica, owner of Epilogue Book Company , an independent bookstore with a great collection of western literature. Erica, thank you for welcoming me to Steamboat! I also met a few of the local personalities and visited with some wonderful folks from Deep Roots, a newly formed group dedicated to the growing and raising of local food. They were intrigued with my stories of rearing my son and daughter on a small family ranch in Wyoming. After the TV interview, John and I headed over to the Fairgrounds. Steamboat hosts a great rodeo during the summer months. Though we were too late in the season for a performance, we were lucky enough to stumble onto the facilitities where Sombrero Ranches keeps some of their horses. Randy, one of the wranglers, eased up on his morning chores and took time to visi
Post a Comment
READ MORE »

By Connecting People with Nature, and Writers with Words August 20, 2008 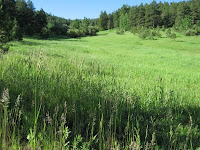 Yesterday morning, as the sun crested the high, snow-frosted mountains to the west, I hiked to my favorite meadow. No one else was on the trail that meanders uphill through the ponderosas and spruce. As I came into the clearing I heard the rattling of antlers. Seventy yards away stood nine bull elk, making their way from the meadow up into the higher country. One stood on an uplift of rocks, polishing the tongs of his antlers on a chokecherry bush. Two others stood facing each other with hooves planted, their antlers locked in an age-old battle of strength. Two others were sparring nearby, clacking their racks, backing off, then clacking again. The meadow reverberated with the sound of their rutting behavior. A week ago, I had seen this same bachelor group out in the horse pasture, their antlers a tender throbbing red then. Now, their six and seven-point racks shone in the morning sun, polished and lethal. They whistled into the daybreak. This morning, hiking that same trail, I enc
2 comments
READ MORE »

Cowboys in the Boardroom

By Connecting People with Nature, and Writers with Words August 20, 2008
Two weeks ago I met a stranger for lunch. I had come across a link to his site on the American Cowgirl magazine site and was intrigued. A few years ago, Jim Owen wrote the book Cowboy Ethics: What Wall Street Can Learn from the Code of the West. I sent Jim a note and the next day he picked up the phone and called. As synchronicity would have it, he was flying into Denver the next day and offered to buy me lunch. Jim's a happily married man - this was not a rendezvous, but a reaching out of like-minded souls. Life is often a journey of trust, where we make a conscious decision to "go with the flow" and trust the unfolding of our lives. When I met Jim, the first thing he said to me was, "I'm not a cowboy." Obviously, he wasn't. That was immediately apparent. James P. Owen is the Managing Director of Austin Capital Management and serves as the firms Director of Corporate Values. At the restaurant, he set a copy of Cowboy Ethics on the table and started
Post a Comment
READ MORE »

News from the Publishing World

By Connecting People with Nature, and Writers with Words August 13, 2008
I was in Santa Fe a couple of A few weeks ago speaking at the “Writing Women’s Lives” conference and had the chance to hear Leigh Haber give an hour-long update on what’s happening in the world of New York publishing. I was impressed enough with Leigh to want to share what I learned. My notes were hastily scribbled, so I apologize in advance for any inaccuracies. They are mine, not Leigh’s. Leigh, an extremely experienced editor, started out I believe as a news aid for The Washington Post Book World, then worked as a New York publicity director for Harcourt Brace and other publishers. She was also with Hyperion Books, and then with Rodale Publishing until spring of 2008. The illustrious authors she has worked with include Al Gore, Steve Martin, Peter Jennings, Alice Walker, Terry Gross, and Tess Galligher. The highlights of her talk included: Blogs and Blurbs - why they're important Why Interactive Books are the Wave of Now Author Platforms - how to get one Author's Pass
Post a Comment
READ MORE »

Watching Beijing with a Tibetan Guest

By Connecting People with Nature, and Writers with Words August 12, 2008

Last Friday night, Dolma Kyab came to our home in Mt. Vernon to watch the Opening Ceremonies of the Olympics. Dolma is from Tibet. Seven years ago, he sought political asylum in the United States, leaving his wife, children, and family in Tibet. In his homeland, he had been a high school teacher and was enrolled in law school. Now, living in a small town in Utah, he works for a landscaping company. In Tibet, he was called Dolmakyab . All one word. When he came to the U.S., he was told that he must have two names - a first name, and a last name. So his name was split in two. Calling him Dolma is a reminder that his life, too, has been severed. Just before Dolma left Tibet, he told us there had been a riot between a group of Tibetans and Mongols; more than 200 modern warriors threatening to attack. Dolma and four other teachers thrust themselves between the warring factions and, miraculously, violence was averted. This modern confrontation, fueled by generations of hate, lit a
Post a Comment
READ MORE »

By Connecting People with Nature, and Writers with Words August 08, 2008
Last Monday, in a small community about 15 miles southwest of Denver, a man and wife left the French doors to their master bedroom slightly ajar with their two dogs sleeping on the floor beside them. At about 4:30 in the morning, a mountain lion walked into the bedroom. The woman woke at the sound, got out of bed, and in the darkness made out a shape. "There's an animal in here," she said to her husband, and she didn't mean the dogs. But the lion already had the couple's 12-year-old yellow Labrador in its jaws. Predator and prey disappeared into the grey dusk. The next day, wildlife officers found the partially eaten remains of the dog buried beneath some pine needles. With the couple's permission, a trap was set. When the cougar returned to finish the meal, the cougar was caught, then euthanized . I found this story, about a mountain lion who had lost its fear of humans, buried on page 10 of the newspaper next to an ad for a climate-control company and be
4 comments
READ MORE »

Our Connections to Each Other - A Renewable Energy

By Connecting People with Nature, and Writers with Words August 05, 2008

When the ancient Greek hero Hercules engaged in mortal combat with Antaeus, the son of Neptune and Terra - Ocean and Earth – he almost lost the battle. Every time the body of Antaeus came in contact with the Mother Earth, his strength was mysteriously renewed. Mighty Hercules slew Antaeus only because he managed to wrestle the giant’s body from the land, lifting him away from his source of strength, his very source of life. When I moved from our small ranch in the Bearlodge Mountains of Wyoming, I felt as if I, too, had been torn from the earth. Severed by a Herculean destiny from all that sustained me – from our beloved Border collie, from the horses and white-tailed deer, from the raucous blue jays and red-tailed hawks. For me, like for Antaeus, the loss of emotional, spiritual, and physical strength was sudden and dramatic. Human beings have historically been strengthened and renewed by an intimate connection with the earth – in sync with its rhythms, regenerative power, and ins
Post a Comment
READ MORE »

By Connecting People with Nature, and Writers with Words August 05, 2008

Impromptu Sharing. Here's a few fun links to check out if you want to view some photos and read a bit more on June's "Saddle Up! Horseback Writing Retreat" in Wyoming, and some of the past "River Writing Journeys for Women." American Cowgirl Magazine (a great magazine and a short blog from me - scroll UP to see photo the handsome little BLM mustang I rode) Giving You a Voice (scroll DOWN 'til you get to that fabulous photo of Maggie on the river) Slide Show from the "Saddle Up!" retreat (Elspeth Nairn's cool photos from our June '08 time at the Vee Bar Guest Ranch in Wyoming (Literature and Landscape of the Horse retreat) Nicki Ishikawa's Slide Show from the Vee Bar Guest Ranch retreat (June '08 Literature and Landscape of the Horse retreat) Check back in October for photos from the September "River Writing and Sculpting trip" with amazing Santa Clara Pueblo artists Roxanne Swentzell and Rose Simpson. It
Post a Comment
READ MORE »

By Connecting People with Nature, and Writers with Words August 04, 2008
Today, with the Olypmics in Beijing only four days away, I think of China, and my mother's love of this mysterious and exotic land. Her childhood memories cloaked her during years of debilitating cancer as an adult. Often times, they were the only protection she had. I have just painted the dining room in the mountain cabin that used to be my mother's, but which is now mine, a Chinese cherry red. She would have approved, and perhaps - even now - is casting her blessing like peonies petals blown down from heaven. On the living room wall of every one of our homes – from this mountain home in the Colorado Rockies, to our Kew Gardens apartment on Long Island – my mother hung a tiny pair of Chinese shoes. The thinly layered soles of these shoes are protected by rawhide, which forms a thick cushion meant to protect one’s feet from the overflowing gutters of China’s crowded cities. The upper shoe is cotton, decorated with colorful, hand-embroidered silk made during the nationalist y
Post a Comment
READ MORE »
More posts