Showing posts from May, 2012
Show all

Ron Rash writes The Cove, and Flute Music in Peru

By Connecting People with Nature, and Writers with Words May 06, 2012 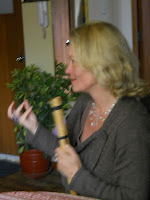 I never expected to be thinking about flutes when I went to Peru, nor when I began reading Ron Rash's new novel THE COVE on the return flight .  Nor did I expect, on the way to Machu Picchu, to sit next to Ulla, a beautiful Finish flautist with a doctorate from Juilliard.  And when I fell in love with The Cove's female protagonist Laurel, I didn't expect to be thinking about the $50,000 Gift of Freedom Award  sponsored by A Room of Her Own Foundation .  That's the magic of synchronicity, though.  Like stars aligning with a grand design, our lives gain meaning as we discover how we are connected to each other. Laurel, scarred by a birthmark, lived in the remote Appalachian Mountains during World War I.  Her only escape from loneliness was found during brief conversations with her brother, or when listening to the songs of the wild birds.  It's not hard to imagine why she was drawn to the mysterious man who suddenly appeared in the cove, and to the melodic fl
5 comments
READ MORE »
More posts