Showing posts from March, 2015
Show all

The Extraordinary Worlds of Alice Hoffman and Nick Arvin

By Connecting People with Nature, and Writers with Words March 02, 2015 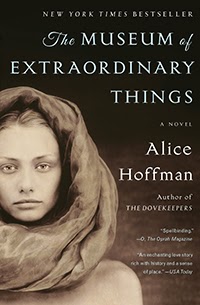 A few days ago, as I was turning the final page on Alice Hoffman’s novel The Museum of Extraordinary Things, Nick Arvin posted (rather humbly) to his Facebook page that his short story “The Crying Man” had just been awarded this year's Alice Hoffman Prize by Ploughshares . Alice Hoffman, as final judge for the Ploughshares award, was obviously impressed with Arvin's writing.  She singled his story out from an elite field, as did the final judges (myself, and two others) who selected his novel  Articles of War  to receive the Colorado Book Award for Best Novel in 2007.   How interesting if we could somehow weave a web made of all the synchronistic strands that link judges to winners.  More than luck connects us - some mysterious "call and response" seems to be at work, an invisible silky strand linking this particular story to  that particular heart and mind. Arvin’s work first impressed me when I read Articles of War ,  his spare and powerfully moving nove
Post a Comment
READ MORE »
More posts