Showing posts from January, 2012
Show all

If God Is In The Details: Metaphor, The Great Pandemic, and Hummingbirds

By Connecting People with Nature, and Writers with Words January 06, 2012 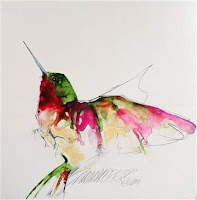 A poem, and then a few thoughts on metaphor... Headstones carry last century’s news etched into granite gone green, lichen as cold as the shade side of an empty house.   I wait while he kneels at his son’s grave, wander the brittle grass paths, find mothers buried with newborns   Born   Died The dates are the same.   No span of life stretches between them.   I find brothers and sisters, a wife, then a child, a husband – the Great Pandemic. Grief is a familiar load.   It bends us at the shoulders, buckles his knees as I wander, waiting for the right time to go to him, the sorrow of a town etched in each stone. Grave after winter grave, I see where death turned the calendar December 1918 January 1919 Seven months later we return to the family plot. Too soon.   The soil hasn’t settled.   They have piled a mound of cold earth on his son’s grave, carving space for the wooden box that holds the grandmother’s ashes.    A boy holding the earth.
15 comments
READ MORE »
More posts